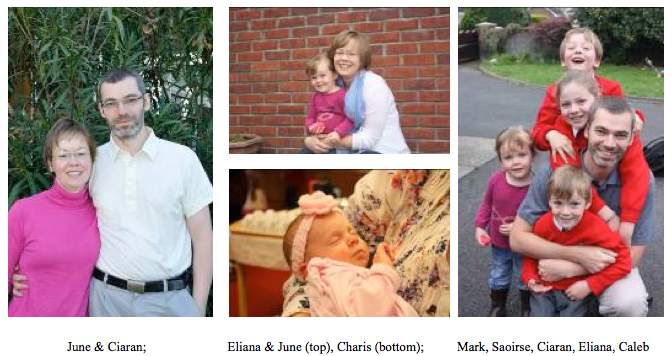 Ciarán is from Navan in Co. Meath and June is from Mountrath Co. Laois. Both were raised in Roman Catholic homes and both came to know the Lord while studying engineering in college. After a few years working as engineers in Cork and Dublin they both enrolling in full-time theological education at Dallas Theological Seminary, Texas. Ciarán graduated with a Masters in Theology and June with a Masters in Biblical Studies. They returned to Ireland in 2007, settled in Trim, where they established Living Hope Church. Since then Ciarán has pastored the church.

It began with eight people in our living room. After a year we moved to a hotel function room for Sunday services. After three years there we moved to rent a building Monday to Sunday, where we have been for three and a half years. God has blessed the work, and continues to grow and build the church here.

He and June have five children: Saoirse; Mark; Caleb; Eliana; and Charis. In addition to church planting, as of January, Ciarán just began teaching as an adjunct teacher in the Irish Bible Institute, Dublin, (www.ibi.ie). His class is the Life and Teaching of Christ. It’s a wonderful opportunity to teach people from around the country in different church settings. Students are involved in full-time church leadership, lay leadership, para-church ministries, or simply wanting to study to grow in their relationship with God.

A word about our philosophy of ministry.

Since the Good News of Jesus is for people who are broken and needy we want to set the ‘spiritual DNA’ of the church to be grace and hope centred. We want to grow a culture in the church that accepts and helps everyone grow in their understanding of the Good News and participation in the new life in Christ together. So we have stories to tell as follows:

A lady who began attending our fellowship about five years ago was about to leave her husband for his unfaithfulness. They have three children. But we counselled her to stay and work through it. After persevering and praying and even completing a 4 year Degree program in the meantime, their marriage has improved greatly and the family is together. Nine months ago her husband’s family told him he does not appreciate his wife for who she is. He realised he had mistreated her and one evening got on his knees before her to apologise that he had totally neglected her. She has seen God’s power to change both her heart and his over the last few years.

One young man called Gerry grew up typical Roman Catholic in Ireland and married a woman who grew up in a Christian home. Since meeting her family he has become curious about Scripture and God. While his enthusiasm has grown she has realised how religious and ‘Christianized’ she has become over the years. They started attending our church in January last year and in January this year Gerry led his first Bible study. He did great. And she has begun to ask very good questions as she explores faith in Christ perhaps for the first time in her life.

Trim is situated in County Meath, which has a population of 184,000 as of 2011 census. It is the fifth highest populated county in the Republic behind Dublin, Cork, Limerick and Galway and this without having a major city.

Trim is a small rural town of approximately 11,000 people but has a much larger catchment population surrounding it. It is an active community with sports clubs, music and drama, etc. with people from mixed backgrounds. There is a significant farming community while a large segment is international. There are two major employers in the area which contribute to that. One is the OPW, a Government department responsible for managing and maintaining the State’s property portfolio, including national monuments and historic properties employing approximately 300 people. The second major employer is the European Union veterinary offices, located 4 miles away. This is the headquarters for the EU Food and Veterinary Inspectorate. It is the first head office of an EU agency to be located in Ireland.

Trim is a heritage town containing several significant historical sites including Trim Castle. The making of Braveheart in 1994 put Trim on the tourist map and the town has capitalised on that. Only 26 miles from Dublin makes it accessible for tourists but also a reasonable distance for many to commute to the city.

Roadmap for the future.

Which of us really knows what the future of our ministry holds? But we make plans and hold them firmly, yet loosely enough that God can easily change them. June and I believe we will be in Trim continuing to establish and strengthen the church here. But there is huge potential to grow a network of Bible study groups in the surrounding areas, which in time could become self-sustaining, self-governing churches. We are excited about the prospect of seeing the church planting ministry here grow.

Along with the local church planting ministry Ciarán is excited to teach in the Irish Bible Institute and have a role on a national scale. There is a huge need to train and equip leaders for churches in Ireland and teaching here provides such a platform.

“What then is Apollos? What is Paul? Servants through whom you believed, as the Lord assigned to each. 6 I planted, Apollos watered, but God gave the growth. 7 So neither he who plants nor he who waters is anything, but only God who gives the growth. 8 He who plants and he who waters are one, and each will receive his wages according to his labor. 9 For we are God’s fellow workers. You are God’s field, God’s building”. – 1 Corinthians 3:5-9